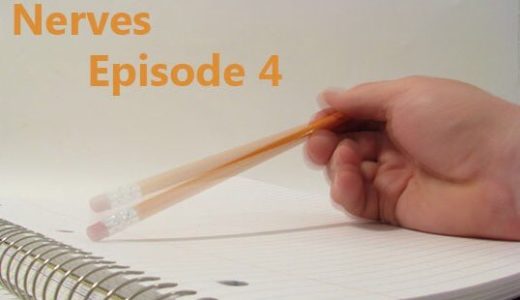 What makes you nervous?

On today’s show we’ll look at how nerves affect our everyday lives. From things we’re most afraid of to how naked comedians prepare for shows and how libraries are changing. We will also talk about how veterans cope with PTSD and an unique form of relaxation. Also, our musical guest, STEFA*, joins us for a live set in the studio.

Musical Guest: Native New Yorker and musician STEFA* will be performing with SLV and WalkTalk @ C’mon Everybody (325 Franklin Ave, Brooklyn, NY), 8:30PM on November 29 – tickets can be purchased on TicketFly. You can visit her website and follow her on Twitter, Instagram and Soundcloud. (Live, on-air performance here).

Reporter Samia Bouzid tells us about a new twist on how people are dealing with their phobias. Whether it’s a fear of spiders or heights or a fear of flying there may be a new way to cope using virtual reality therapy.

What might be considered a nightmare for most people is the hook for an underground comedy show. It’s called the Naked Show and the performers are you guessed it NAKED! Oscar Gonzalez learns why anyone … would do this.

When the N.Y. Public Libraries Get Loud

In a city like New York, where do we go to calm our frazzled nerves? For some, it’s that peaceful quiet place called the library. Well, that’s not always true anymore: libraries are changing, and with more events and programs being offered  the quiet haven is getting squeezed out. Brett Dahlberg has the story.

Yoga with a Heavy Metal Soundtrack

One of the ways some people calm their nerves is with a relaxing yoga practice. But what happens when you swap out the silence for heavy metal? A Brooklyn instructor is using this loud, head-banging music as the soundtrack for her yoga sessions. Manolo Morales brings us more on this unconventional approach.

More than half of New York-area service members return home with psychological trauma. Getting help is often a life or death decision – 22 veterans commit suicide every day, according to a Veterans Affairs report. But now, more and more veterans are turning to therapy dogs to help them cope with PTSD. Nicole Rothwell tells us about the movement to pair veterans with emotional support dogs. 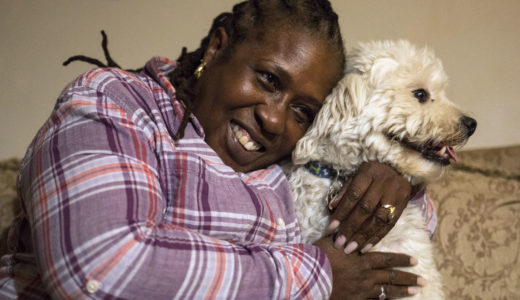 Retired Army Sergeant First Class Lecia Whyte-Rodriques with her adopted rescue dog, Binky. Whyte-Rodriques says she named him Binky because he helps keep her calm and is one part of her PTSD treatment. (AudioFiles/Nicole Rothwell)

AND IN OTHER NEWS ….

The AudioFiles 2017 Team would like to invite you to see us in person. We’ll be LIVE onstage on Friday, Dec. 1, at UnionDocs (322 Union Ave, Brooklyn, NY). Doors open at 6 p.m. and the hour-long show starts at 6:30 o.m. We’ll be talking about REBELS. *Please RSVP and register at this link to reserve a spot since space is limited.* AND we’d like to hear your most rebellious moment … and you could end up in the show. Whether it was your terrible twos, teen years, or in your 30s or 70s. Email us at  [email protected] and be sure to leave a number so we can call you. Or leave us your story in a voicemail at 845-481-0642.

ALSO — AudioFiles reporter Samia Bouzid is joining forces with The Story Collider next week for a live storytelling show about consciousness. The show will feature stories about how one man’s art saved him after 20 years in a mental hospital.  And how Alzheimer’s repaired a relationship between an estranged father and daughter. There’s also a love story between a neuroscientist and a freestyle rapper. Buy your tickets at www.storycollider.org. The show will be at Caveat, on the Lower East Side, on Tuesday, Nov. 21, at 8 p.m.